BMOC: The Grind league stage over, 16 teams advance to finals 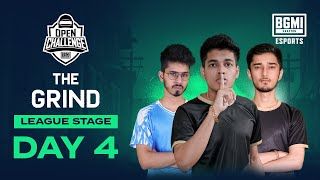 Battlegrounds Mobile India recently ended its League Stage of BMOC The Grind. A total of 16 teams qualified to enter the finals. Leading the standings is OR eSports With 199 points. Team OR defeated Team Insane, who finished second with 162 points, to clinch the league stage champions title. The full list of teams that qualified for BMOC: The Grind finals is as follows:

Meanwhile, the teams that were eliminated are as follows:

The finals are expected to begin on April 14 and end on April 17. The stage will be broadcast on the official channels of Battlegrounds Mobile India on YouTube and other streaming platforms. The teams will compete for a prize pool of over $1,900.

“With the Open Challenge, the tournament looks at leveling the playing field for many aspirational players while providing specialized opportunities to pro-level players,” Krafton, the developer behind the game, earlier said.

Chance to qualify for BMPS

The 16 teams were qualified for the main event of BMOC: The Grind following a fierce competition. The teams will then compete again for a spot in Battlegrounds Mobile Pro Series (BMPS). the highest tier of BGMI competition in India. There will be 24 teams invited to the BMPS, which will then be divided into three groups to compete in a round-robin format.

The top 16 teams from the groups will then be entitled to compete in the grand finals, after which the winner will qualify for a spot in the annual PUBG Mobile Global Championship (PMGC) 2022. It is the highest stage of the esports ecosystem comprising PUBG Mobile, Game For Peace, and BGMI.

The tournament will take place starting from May 19 through June 12. The grand finals will be held for four days, comprising 24 matches in total. The prize pool for the tournament has been confirmed to be INR 200,000 (USD 2,627).

Previously in 2020, the game was banned in India, along with over 100 other mobile apps. The ban was announced by the government of the country on September 2 last year.

“Government Blocks 118 Mobile Apps Which are Prejudicial to Sovereignty and Integrity of India, Defence of India, Security of State and Public Order,” the country’s Ministry of Electronics & IT announced on Twitter.

“In the interest of sovereignty and integrity of India, defence of India and security of the State,” read the press release. “And using the sovereign powers, the Government of India has decided to block the usage of certain Apps, used in both mobile and non mobile Internet-enabled devices. These apps are listed in the attached appendix.”

The Indian government is also committed to “safeguard the interests of crores of Indian mobile and internet users.” and these regulations are made to “ensure safety, security and sovereignty of Indian cyberspace”.